This week’s HART Weekly Review features a letter signed by Baroness Cox to the Government, blogs and a summary of the top stories from the countries where we work.

The UK and Sudan: Trade Relations and Human Rights: The relationship between the UK and Sudan has been strained following twenty years of sanctions, but all seems to have been forgiven or forgotten.

Ilham Aliyev: World community recognizes Nagorno-Karabakh as an integral part of Azerbaijan: The president made the remarks on Wednesday at a meeting of the Cabinet of Ministers dedicated to the results of socioeconomic development of 2017 and objectives for the future, APA reported.

Fulani Herdsmen Attacks: Buhari’s Silence Discomforting: The Catholic Bishop of Gboko, Most Reverend William Avenya, has accused the federal government of being discomfortingly silent in the face of the wave of attacks by Fulani herdsmen on 14 out of 23 local councils in Benue State.

‘Hunger is killing me’: starvation as a weapon of war in South Sudan: Once regarded as South Sudan’s breadbasket, the ravaged Equatoria region is slipping into catastrophe, its once self-reliant citizens now dependent on handouts. An estimated 1.25 million people in South Sudan are on the brink of starvation, according to the latest food and security analysis update by the UN and South Sudan’s National Bureau of Statistics, released in November.

Sudan protests: Three dead in ‘bread protests’: Three people have died in protests against the rising cost of basic foods in Sudan. Protests sparked after the government decided to cut subsidies, which led to the increase in prices. 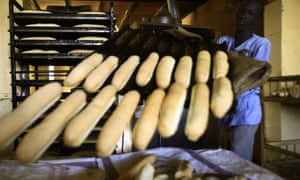 Tullow Oil to exit Uganda this year: In a trading and operational statement update released on Wednesday, Tullow Oil said the farm-down in the country is on progress as the firm awaits Government’s approval of transactions with the other joint venture partner firms in Uganda.

Abducted at nine to be a girl soldier for Kony: ‘Now people call me a killer’: When Agnes Acayo escaped from the rebel group who had abducted her at the age of nine, she felt overjoyed to be free and back home at last. She had spent 10 years in captivity as a child soldier and later was forced to marry a member of the Lord’s Resistance Army (LRA) in Uganda.